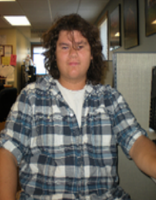 Dustin, age 18, was first referred to Rural Minnesota CEP, Inc. (RMCEP) by his high school counselor for the 2009 summer youth program when he was 14. He participated in work experience, learned work maturity skills, and received mentoring and academic support. Dustin lived with his Mom and sister on the White Earth reservation. With the first work experience placement, Dustin did a very good job and stayed at the worksite into the school year per the worksite’s request. Things went very well until he had to adjust to a new supervisor and quit the job even after staff intervention. In hindsight, Dustin indicates he was just too immature and handled the situation badly. The RMCEP Youth Services Coordinator and his previous worksite mentors continued to work with him and he eventually asked to return to a new worksite. He interviewed and was hired to do custodial/maintenance work at a county courthouse and quickly responded to new worksite mentors and demonstrated his skills with repairing a variety of things. He was willing to work hard, responded well to direction and again the worksite asked that he be able to continue working into the school year. His attendance improved at school as he had to be at school in order to be able to work after school. Throughout the next couple of years, Dustin worked at this worksite to maintain the mentorship and earn wages and also in other unsubsidized jobs staying on active case management with the RMCEP Youth Services Coordinator.

Dustin participated in some career exploration activities and job shadowing and eventually considered post secondary training. He had a lot of support from his high school shop teacher and showed a lot of promise with his technical skills, particularly mechanics and welding. With some networking, by his senior year he had an out of state college recruiting him for their shorter term technical auto mechanics program and they were willing to look at scholarships. Programs like this that were closer to home were two year programs and he wasn’t willing to consider that. At this point, Dustin was open to pursuing this opportunity even if was far from home. He hadn’t had many opportunities to travel off the reservation. He failed to arrange a visit to WyoTech in Laramie, Wyoming and did not follow through with the application for a scholarship either, despite support to do so. As deadlines got closer, he started backing away. He entertained the idea of the military but after helping him explore that, he changed his mind.

During this time, his Mom moved out of their home and he had to start supporting himself. Despite all the efforts to pursue the out of state post secondary opportunity and support from school staff, RMCEP staff and worksite mentors, Dustin’s academic progress was slipping and he was missing a lot of school. RMCEP staff continued to keep communication open between him and the school and worksite and got him somewhat back on track. He said he wanted to make his own decisions and that he was used to taking care of himself. He didn’t want so many people trying to tell him what to do. With only a few months to go until graduation, he stopped going to school. School staff attempted to reach him but were unsuccessful. The RMCEP staff was able to contact him and convinced him to meet with worksite supervisors/mentors to work on a plan. He understood his work experience job would end if he did not keep up with his school work. He was told that he would need to purse a GED if he wouldn’t return to high school. He refused to go back to school despite the school reaching out to him to help him catch up on credits.

After a week to think about things, Dustin contacted the RMCEP Youth Services Coordinator indicating that if we could get him linked up with a GED instructor, he would pursue that route. He was still not willing to return to the high school even for a couple of months. RMCEP staff communicated with the school and they reluctantly agreed to do what they could to support his decision to get a GED. Staff connected him with a GED teacher on the reservation and within a week of referral he tested out of all subjects and had his GED by the end of the month. At that point, his lifeline was his part time work experience job. We agreed to allow that to continue to support himself, but he had to either actively participate in job search to find full time employment or pursue training options. Dustin missed several opportunities arranged for him to tour manufacturing opportunities but was eventually reengaged in following a plan.

Dustin was enrolled and participated in a short term welding program offered through a grant to RMCEP from the Minnesota Job Skills Partnership. He received his welding certificate with additional certification in the American Welding Society (AWS) Structural Steel Code. He then worked with the Detroit Lakes WorkForce Center to update his resume, start an active job search and had several interviews for welding positions in the area. He accepted employment as a full time welder with a local manufacturer and is eligible for a full benefit package. He is very excited and is appreciative for having RMCEP’s assistance throughout high school, helping him get his GED, and helping him get the welding training. He is happy that he secured full time employment in a field he is interested in and in an occupation that is in demand. He believes that without the services received, he would probably be in a minimum wage job on the reservation without benefits. He is looking forward to his future!