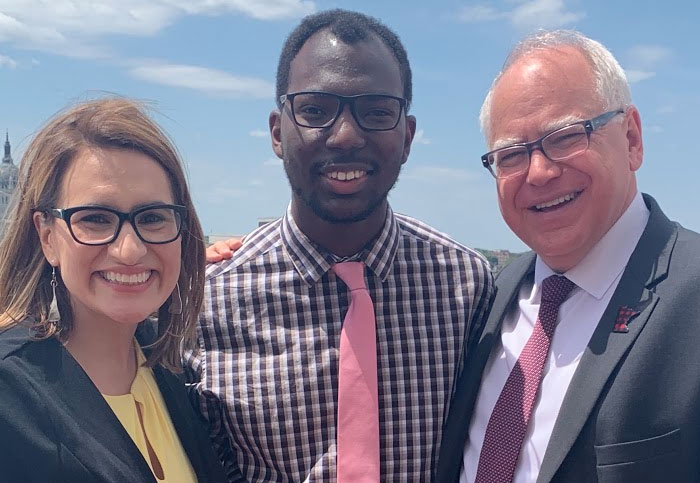 The changes a young adult can experience over a few years can be quite extensive and challenging. For D’Andre Gordon, predicting he would graduate from college this spring was difficult to envision when he moved to Bemidji seven years ago.

“I had big plans, but honestly I never thought I would be where I am when I was 14,” he said. “I am very thankful and fortunate for the opportunities provided to me by Rural Minnesota CEP to help me get to where I am.”

Gordon moved with his family from his native Jamaica to Bemidji in 2013 and now is on track to graduate this spring from Metropolitan State University with a double major in criminal justice and psychology. Looking back at his first years in Bemidji, Gordon said he was a teenager with plenty of dreams, but without the knowledge to begin pursuing them.

“Rural Minnesota CEP gave me the leg up I needed to be successful in both my college and career journey,” he said. “The program proves that the opportunity gaps that persist in Minnesota can be closed when young people are directly invested in and provided with ongoing support.”

Gordon’s college career began at Hamline before transferring to Metropolitan State University. His experience includes internships in the offices of Minnesota Governor Tim Walz and St. Paul Mayor Melvin Carter. He has been a Public Policy Advocate since January with the Catholic Charities of Minnesota. There, he has been active in well-being policies like homelessness and the associated barriers, such as the criminal system, voting and freedom of movement.

“This work is very personal to me and there is a clear need for this type of assistance,”  Gordon said. “As Paul Wellstone said, ‘We all do better when we all do better,’ and life today is not always centered on the voices of those people who have the most need.”

As he acclimated to life in the U.S. at Bemidji’s Voyageurs Expeditionary High School, college became his goal. He soon learned all that encompassed the college dream was a daunting task. With parents unfamiliar with the U.S. education system, Gordon was confronted with many barriers, from the process of choosing a college itself to paying for college or even obtaining a job while in high school to help pay for his future college goals. RMCEP was there to provide Gordon with the solutions to his questions.

“RMCEP has always been there for me for whatever I needed help with,” Gordon said. “That started with finding a job in high school that helped me grow by giving me more responsibility to foster those college-preparedness skills that have made my college life easier.”

RMCEP provided financial assistance for Gordon, from covering the majority of his tuition to providing additional funding to further his advancement like automobile maintenance. And RMCEP coordinators helped him craft strong resumes and cover letters needed for job applications and were readily available to walk him through any decision-making processes that would arise.

“I am so thankful for their wonderful support because, without RMCEP, I probably would have delayed college for a year or two until I could earn enough money and build my financial standing,” said Gordon. “The best part about RMCEP is they have a strong belief in lessening the disparities in the state for those who do not have access to what they need.”

Gordon’s future plans definitely involve policy work, and perhaps foreign policy. He has applied to several graduate schools internationally and plans on applying to programs within the U.S, with concurrent degree programs in law and public policy or international affairs in mind. But he definitely is keeping his options open to working after graduation. The confidence to go with several options came from his time spent with RMCEP, he said.

“RMCEP helped me be confident though the times I felt like I was not doing enough,” he said. “They encourage you to dream big, but be practical by making actionable steps and to understand if you are putting in the effort, then you are doing enough.”

Regardless of graduate school or employment, Gordon is eager to be able to pay the assistance RMCEP provides forward.

“I hope at some point I can provide similar assistance of mentorship and finances to others,” he said. “I did not know what I needed when I was younger and I do not want others to be in the same position to be forced to choose less favorable options.”